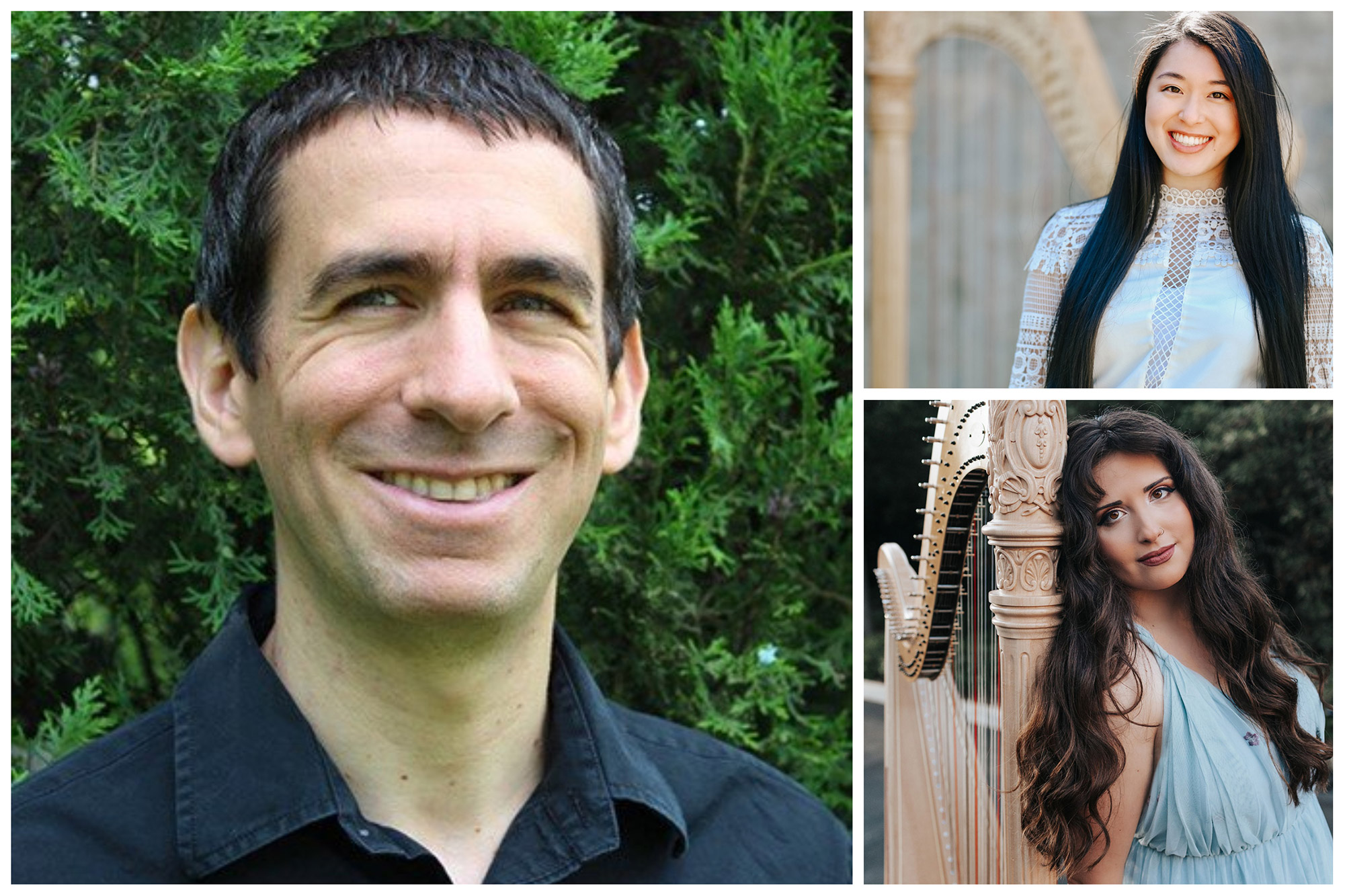 Gilad Cohen has been commissioned to write a duet for two harps for the Alyssa Katahara and Anya Garipoli.

Gilad was praised by the 2010 Israeli Prime Minister Award Committee for “creating a personal language fusion that has a unique dimension” in music that is “fascinating, vibrant and drawing the ear as well as the heart”.  He is very familiar with the harp and Alyssa and Anya are excited about working with him on this new piece of music for them.

Gilad Cohen has been commissioned to write a duet for two harps for the Alyssa Katahara and Anya Garipoli.

Your donation to Coretet will help make this new piece of music possible. 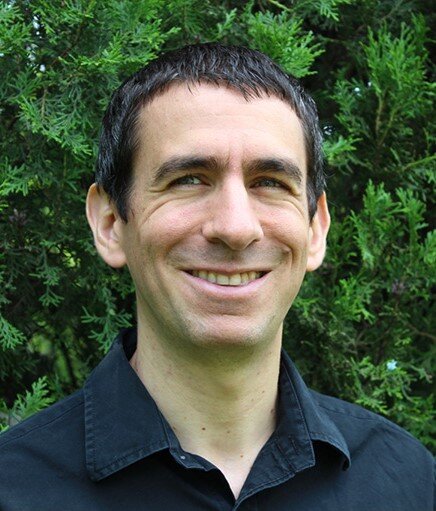 Praised by the 2010 Israeli Prime Minister Award Committee for “creating a personal language fusion that has a unique dimension” in music that is “fascinating, vibrant and drawing the ear as well as the heart,” Gilad Cohen (b. 1980) is an active composer, performer, and theorist in various musical genres including concert music, rock, and music for theater. His music adapts features from a wide range of musical realms and explores possible interactions among them, bringing to his creative table the persistent textures of rock, the painstaking orchestration of impressionism, the gloomy harmonies of grunge and metal, the jubilant rhythms of klezmer, the intricate imitation techniques of Baroque, the motionless landscapes of psychedelic rock, the agile melodies and scales of Arabic music, and the striking dissonances of 20th-century avant-garde.

Gilad has received commissions from Barlow Endowment, ASCAP, Chamber Music America, Concert Artists Guild, Parlance Chamber Concerts, Houston Arts Alliance, Tre Voci (Kim Kashkashian, Marina Piccinini and Sivan Magen), and Jerusalem Music Center, among others. His music was performed in North and South America, Europe, Asia, and the Middle-East and released on Albany Records, Naxos/Delos, and Navona Records. Gilad’s notable awards include the Barlow Prize, the Israeli Prime Minister Award for Composers, and prizes from the American Liszt Society, Lin Yao Ji Music Foundation (China), Franz Josef Reinl Foundation (Austria), and Lycia Guitar Days (Turkey), among others. His music for the stage includes the monodrama Dragon Mother for soprano and orchestra, the one-act musical Healthy Start, and music for various productions in the US and Israel including Shakespeare’s Macbeth, Bertolt Brecht’s The Good Person of Szechwan, and Nissim Aloni’s Napoleon – Dead or Alive!.

Gilad has played piano, bass guitar and guitar with various ensembles at venues in the US, Canada, Mexico, and Israel including New York’s Merkin Hall, Jazz at Lincoln Center, and Symphony Space. His research about the music of Pink Floyd has resulted in publications in books and academic journals, lectures in the US and Israel, and the first-ever academic conference devoted to the band that he produced in 2014 at Princeton University together with composer Dave Molk. An Associate Professor of Music at Ramapo College of New Jersey, Gilad holds a Ph.D. in Composition from Princeton University and is a graduate of Mannes School of Music, the Jerusalem Academy of Music and Dance, and BMI Lehman Engel Advanced Musical Theatre Workshop. 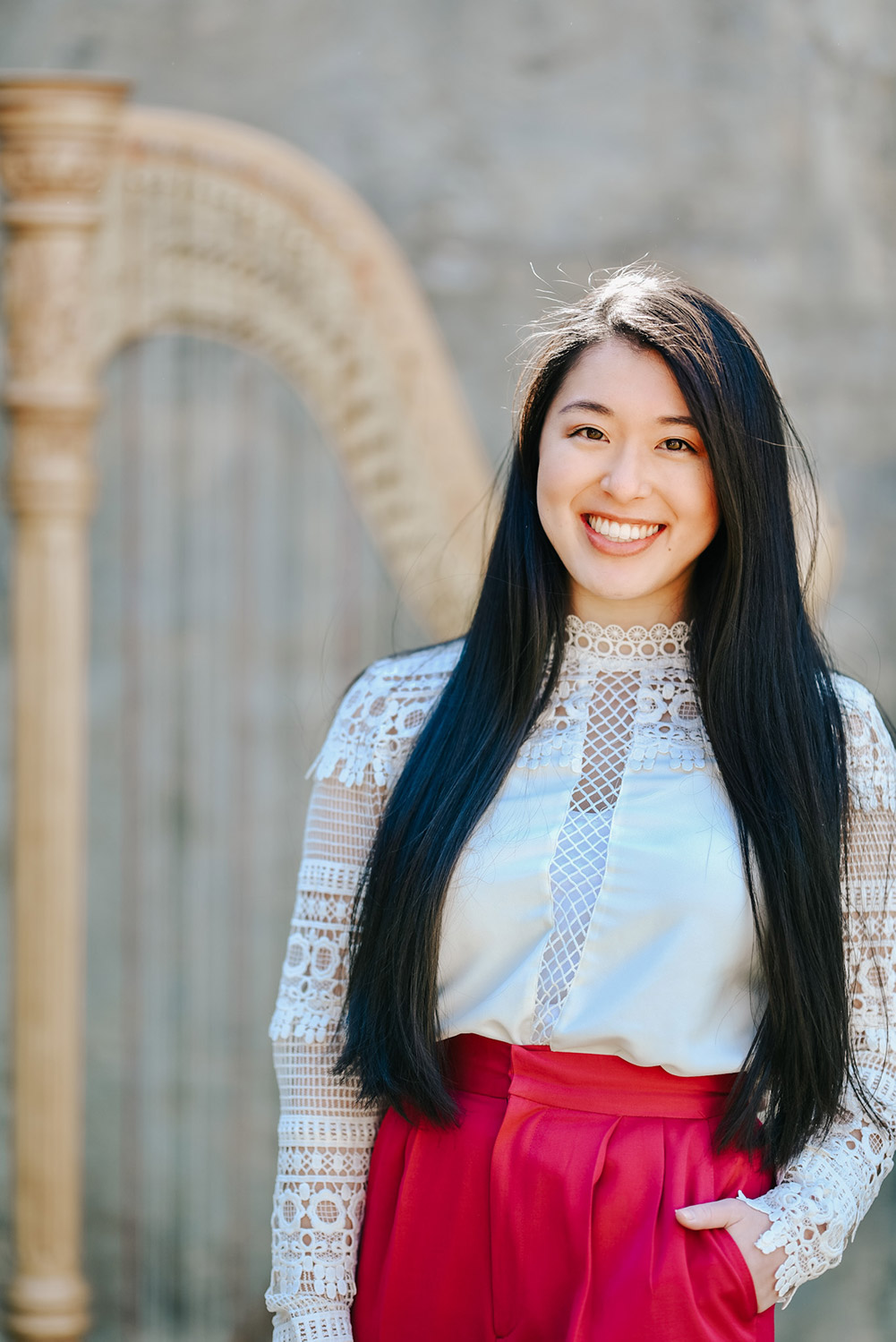 At the age of 2 Alyssa Katahara began her musical journey playing violin but was quickly captivated by the harp which prompted her to take up the instrument at 5 years old. Alyssa grew up as a military child. As such, throughout her childhood she was afforded the opportunity to experience a multitude of cultures across the world spanning 9 various states and countries from Hawaii to Germany. This gave her the unique opportunity to study with a myriad of inspirational harpists who each left their valuable mark and shaped her musicianship.

Alyssa spent her summers as a fellow at the Tanglewood Music Center, Orchestra of the Americas, Music Academy of the West, and National Repertory Orchestra. She spent other summers studying at the Aspen Music Festival and School with world renown harpists Nancy Allen and Sivan Magen along with the Académie Internationale d’Été de Nice with Berlin Philharmonic principal harpist, Marie-Pierre Langlamet.

Alyssa has been awarded top prize in numerous solo and concerto competitions. Most recently, Alyssa was awarded second prize in the Young Professional division of the American Harp Society National Competition. Consequently, as part of the Winners Outreach Program, she presented at the 2022 American Harp Society Conference. There she performed Debussy’s Cello Sonata with Israel Philharmonic’s cellist Gal Nyska in a masterclass given by Sivan Magen. As the grand prize winner of the Hennings-Fischer Young Artists competition, Alyssa appeared as a featured artist with the Burbank Philharmonic. As a soloist, Alyssa has also performed with the Colburn Conservatory Orchestra, Pasadena Community Orchestra, National Repertory Orchestra, National Philharmonic, and Interlochen Arts Camp Philharmonic, among others.

A passionate music educator, Alyssa has hopes of making the harp a more accessible instrument. While living in Los Angeles, California, she was on faculty of the harp department for the Colburn School’s Jumpstart Program where students are provided tuition-free music instruction and instruments. Now in Vancouver, British Columbia she continues to grow her studio at the Vancouver Symphony Orchestra School of Music.

Alyssa is an Interlochen Arts Academy graduate where she studied with Joan Holland. She continued her harp studies at the Colburn Conservatory of Music with JoAnn Turovsky where

she received her Bachelor and Master of Music degree in harp performance with an emphasis in pedagogy. 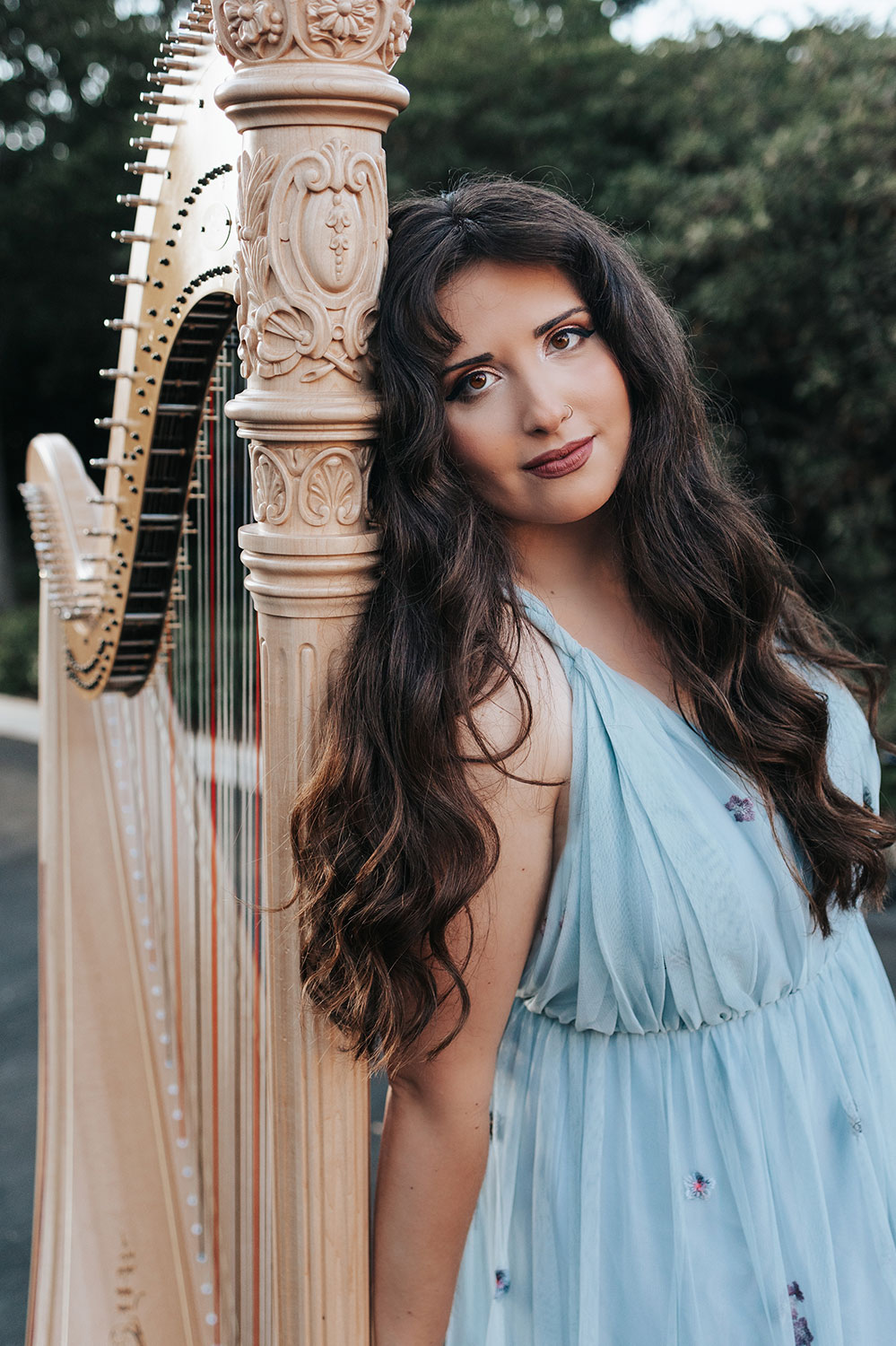 Making a name for herself as a dynamic young harpist of her generation, Anya Garipoli is committed to bringing the harp into the 21st century by forging a new artistic identity for her instrument. A versatile and multi-skilled musician, Anya is just as comfortable performing solo harp music in a large concert hall as she is playing in an orchestra pit or making electroacoustic pop covers with loop and effects pedals.

In addition to solo performances, Anya is an avid orchestral player and chamber musician. She is currently in her second season as Principal Harpist with the Venice Symphony in Florida and serves as an associate member of the Civic Orchestra of Chicago and substitute musician with the New World Symphony in Miami. Anya has performed in some of the best concert halls in the country, including Carnegie Hall, Walt Disney Concert Hall, and the Segerstrom Concert Hall. She has performed alongside various national and international orchestras such as the London Symphony Orchestra, the New Jersey Symphony, the Oakland Symphony, in addition to various Festival orchestras & local orchestras in her area.

A graduate of Oberlin Conservatory of Music, Anya earned her Bachelor of Music studying with acclaimed solo harpist Yolanda Kondonassis. She is currently attending the Colburn School as an Artist Diploma candidate, under the tutelage of JoAnn Turovsky, Hollywood film score harpist and Principal Harp of the LA Opera and LA Chamber Orchestra.

A dedicated harp teacher, Anya currently teaches her own private studio locally and online, and teaches as part of The Colburn School’s Jumpstart for Young Musicians program, a fully funded program which provides free music lessons and instruments to children from low-income families in the greater Los Angeles county.

In addition to her classical training, Anya is a passionate electroacoustic harpist. She regularly makes pop, hip-hop, and lofi harp covers that use digital audio workstation software and technology gear such as loop pedals, effects pedals, and amplification in order to extend the harp’s capabilities and sound palette beyond what is traditionally heard. Anya is committed to expanding the sound worlds commonly associated with the harp and bringing this ancient instrument into the 21st century. She hopes to forge connection with others and create memorable concert experiences by providing immersive multi-media performances in collaboration with artists of other genres.